Are You Missing Your Old Friends Too?

“You don’t have to have anything in common with people you’ve known since you were five. With old friends, you’ve got your whole life in common.”

While I’ve made lots of friends and connections in St. Augustine, my oldest and closest friends are in other cities – Denver, Chicago, New York, Philadelphia. As I sit in an apartment in Juneau, Alaska waiting for my Chicago bestie to arrive, I realize I’m in the midst of a very unique two-month period. By the end of May I will have seen all of my old, best friends.

In March, my best friend from college visited me with his family in St. Augustine. We used to bond over all nighters putting the college newspaper together, and, local bands – me a local band “groupie” and he a local band member. Sitting having beers with him last month may have been 2018, and, it just as easily could have been 1991. No matter how many kids he has had (two) — or how many husbands I’ve had (two) — time always seems frozen when we’re together. 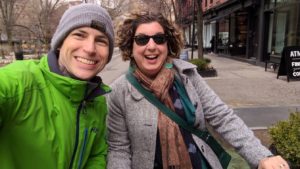 Earlier this month I went to New York to drag an old friend to a Bon Jovi show in Newark, New Jersey. Without a signature event, we always talk about spending many days together, but usually it’s one day (or less) between other-people-visits. As I lay on the blow up mattress that consumed the entire Manhattan mini living room, it didn’t feel too different from the days before he got married when he’d place a blow up mattress for me next to his bed, so we could have a real slumber party. Like when we were both young entrepreneurs and I couldn’t keep up with his around-the-clock schedule, now I can’t keep up with his around-the-world schedule. And, none of that really matters when we’re trying to pack in as many experiences together as we can in whatever city we meet up – Washington DC, London, Bogota, New York.

Now, I wait for my long lost improv partner to land in Juneau. We’re performing at the Alaska State Improv Festival together after more than a two-year hiatus. This friendship has always been an unlikely one given I’m closer to his mother’s age than his, but I realized how much I valued him – and us – the day he uttered the words, “I’m moving away from Denver.” Suddenly I felt a hole creeping into my heart, and, unconsciously I had permission to start thinking about what life could be like away from Denver. Even though our improv paths went in completely different directions, we can always find our way back to each other.

Next month I’ll travel to Nashville to see U2 with my Denver girlfriend who heard me at the bar after improv class say, “I love Bon Jovi.” Her response was, “I do too.” Since then she’s watched me shed tears of Bon Jovi joy and tears from a Bon Jovi mishap. Did tears from a grown woman crying over a rock band shake her up? No and nor did any drama that I’ve been through since we met. She’s always the rock and doing the loving eye roll with me – no matter what ridiculous scenario I find myself in.

The thing about making new friends is that it takes a while for them to become old friends. No one new is like the friends that knew you when you were in college, or going through a divorce or seriously catching the improv bug. Sometimes, no matter how great your new circle is, it’s the old friends that you want to sit down next to at the bar. However, if we only pine for old friends, we miss out on the opportunity to organically watch new friends become old ones.

What adventures are you having to make new friends that could become old ones?